The latest incarnation of Volkswagen’s iconic Transporter Van – keeping ahead of the pack? 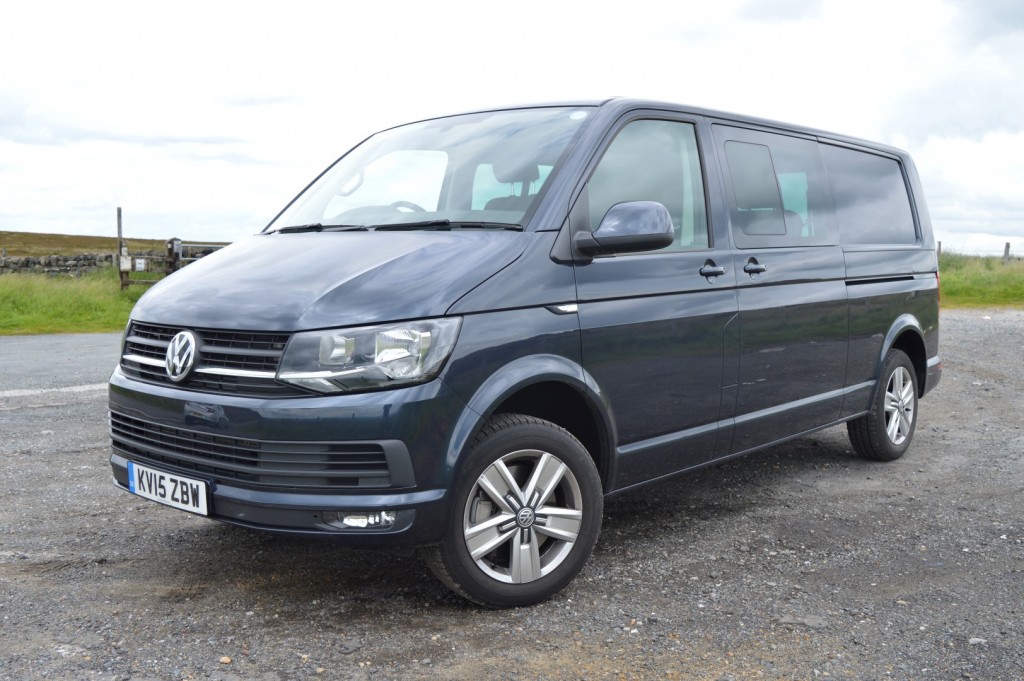 It’s over 60 years since Volkswagen introduced the original T1. Since then, it has become the best selling van in history with worldwide sales in excess of 12 million units and in the UK its desirability has increased with each successive revision. Recognition of its build quality and durability has extended beyond the traditional 1 tonne panel van market and the vehicle is in high demand with leisure users. As a base vehicle for converting into ‘camper vans’ its popularity is second to none and this market has bolstered already strong residual values – a clean used van in metallic paint, with air conditioning and the right engine can make stratospheric money at auction, the relative scarcity of such specification still facilitating a big profit opportunity for those involved in adapting the van for resale to the recreational user.

The latest incarnation of the Transporter is the T6. Prior to the reveal in 2015 Volkswagen attempted to manage expectations by stating that the new van would be ‘evolutionary, rather than revolutionary’ and one can be forgiven at first glance to fail to tell the difference between it and the T5 which preceded it. Many changes are under the skin with particular attention to new safety features but the most notable external difference is the front grill, with its chrome strip and the headlights which are clearly inherited from the manufacturer’s passenger car ranges. 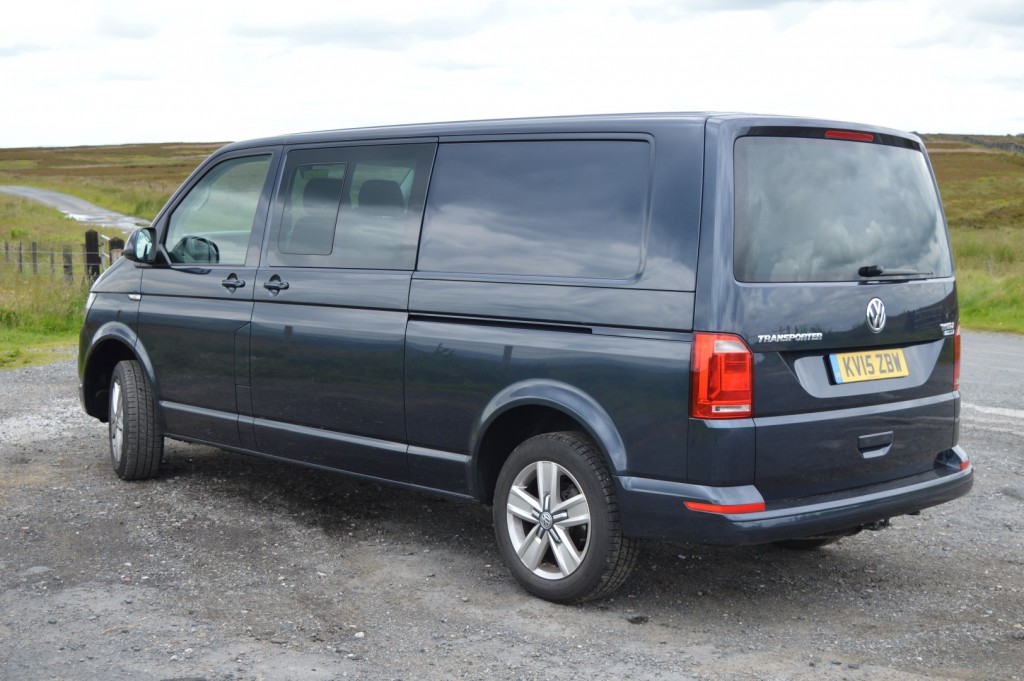 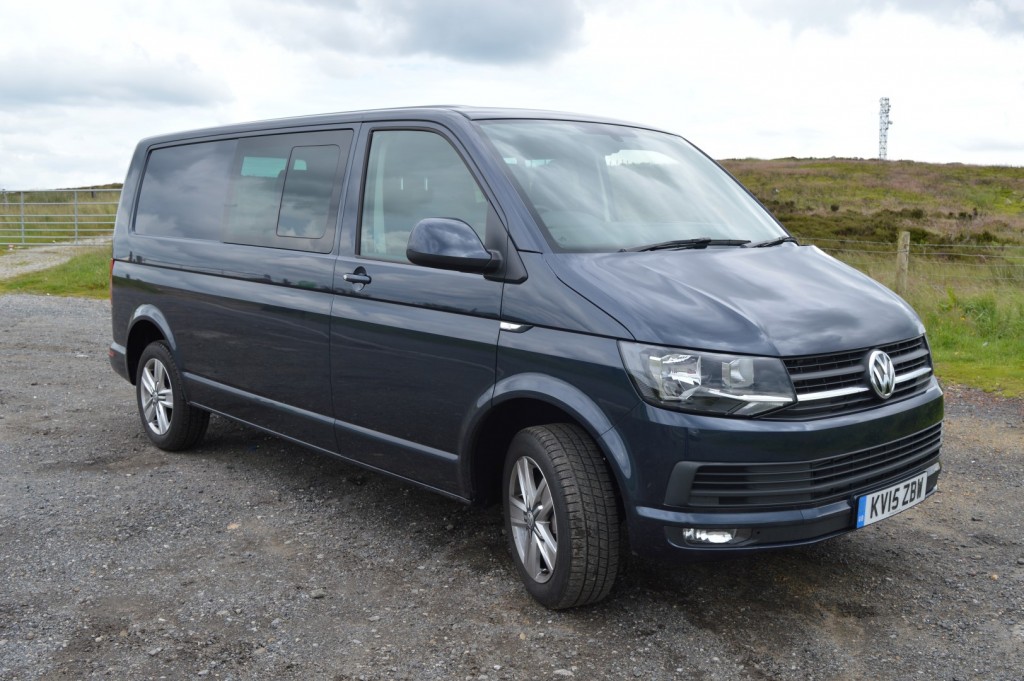 With the exception of the Sportline derivative the test van was from the top end of the range from both a trim and drivetrain perspective. The Highline specification is very well equipped with such features as a multi function display for DAB radio and Bluetooth communication, climatic air conditioning, cruise control, heated windscreen, rear parking sensors, 17” alloy wheels and a plethora of safety related devices such as automatic post collision braking, electronic brakeforce distribution, electronic stabilisation programme, driver alert system and traction control. A Thatcham category 1 alarm is installed for peace of mind and potential savings on insurance premiums. VW’s ‘BlueMotion Technology’ provides low rolling resistance tyres, regenerative braking and start / stop. Under the bonnet, a 180PS twin turbo Euro 5 2.0 litre Diesel engine is combined with the optional 7 speed DSG automatic gearbox. Power is provided to the front wheels and the van benefits from coil spring front suspension together with independent suspension units at the rear.

Volkswagen provided a ‘Kombi’ version of the van for test. A triple rear seat is accessed from the glazed side loading door giving a total seating capacity of 6 providing the optional front dual passenger seat is specified. In this LWB version this still gives a healthy load area and, as the payload of the van is over 1000kgs the VAT is reclaimable for VAT registered businesses using the vehicle for commercial purposes. 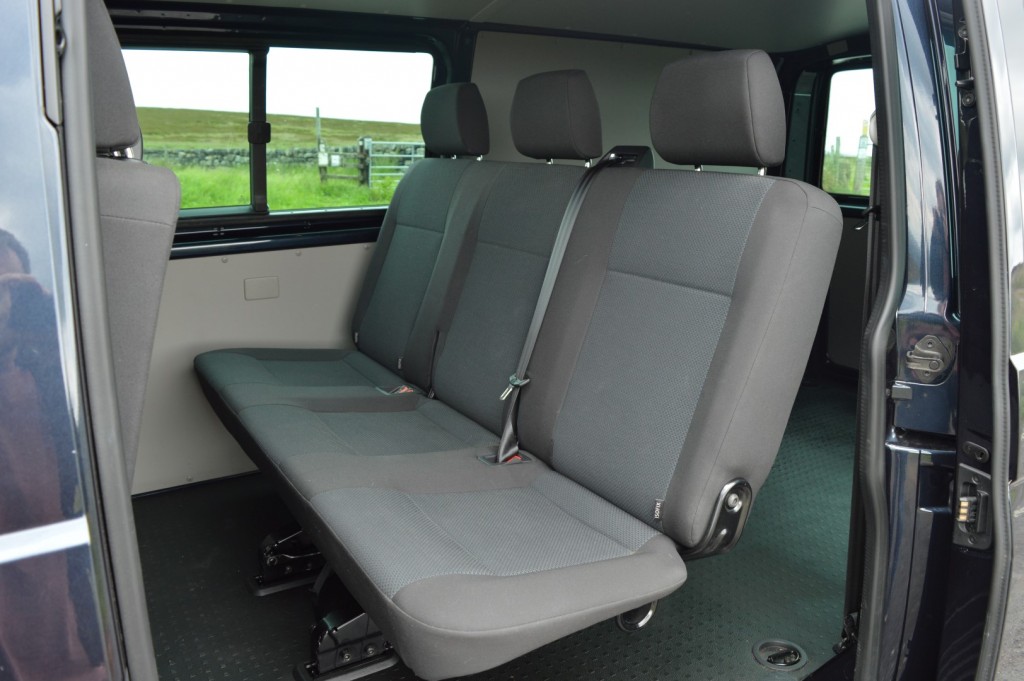 Access to the cab is easy with no real need to utilise the grab handles provided on the A pillar. The drivers seat is easily adjustable and proved to be very comfortable even on longer journeys. In cab storage is sometimes neglected by designers, not so in this case. The driver and passenger doors each have two large bins and in the dash there are no fewer than six cubby holes of various sizes not including the good sized glovebox and a drink holder on each side of the dash. In addition there is a tray on top of the dashboard and VW have thoughtfully provided a 12v accessory socket within it for a phone or satnav. On the passenger side USB and audio input sockets are complimented by a second 12v outlet. 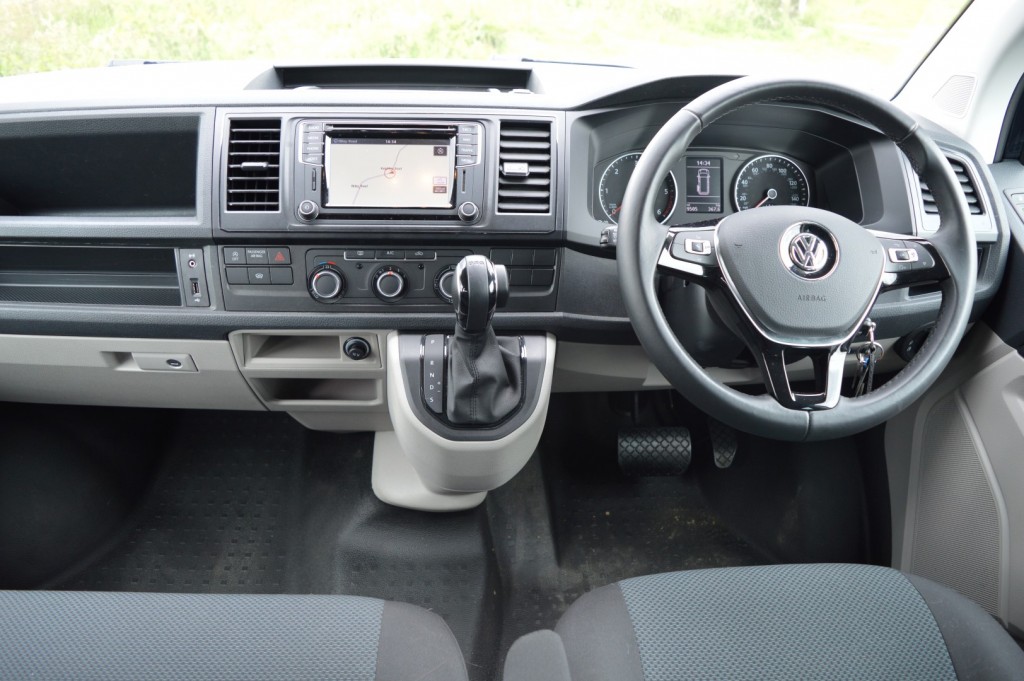 The leather bound multi function steering wheel has a multitude of buttons to control audio, phone, trip computer etc and naturally all are within easy reach of fingers and thumbs. Located in the centre of the dash is the touch screen for the multi-function display which also acts as the screen for the optional sat nav (fitted to the test vehicle). Whilst a central position for this unit makes sense for a manufacturer who is selling the van in both LHD and RHD markets on a commercial vehicle with a wide cab (in comparison to a car) the display is quite a way from the drivers immediate area of vision. In particular when using the navigation system it was quite difficult to see maps and instructions with a quick glance and I found it much safer to use the verbal instructions rather than taking my eyes off the road. Under the screen are two SD card sockets, one of which contained the card for the navigation maps, the other available for media input. These cards are very accessible to either small or light fingers and would be far better located somewhere less obvious, possibly inside the glovebox. Overall, the fit and finish of the cab is of a high standard with quality materials being used. Whilst the appearance is nothing ground breaking the general environment is pleasant, airy and perfectly capable of being used as a mobile office.

The DSG selection lever is in the lower centre of the dash. The available selections for the box are detailed to the left of the lever in an illuminated strip. Unfortunately, in a RHD vehicle these are obscured by the lever itself and, as the selected mode is not always indicated on the trip computer adjacent to the speedometer it was very difficult to tell whether you had selected drive, neutral or reverse without peering around the side. 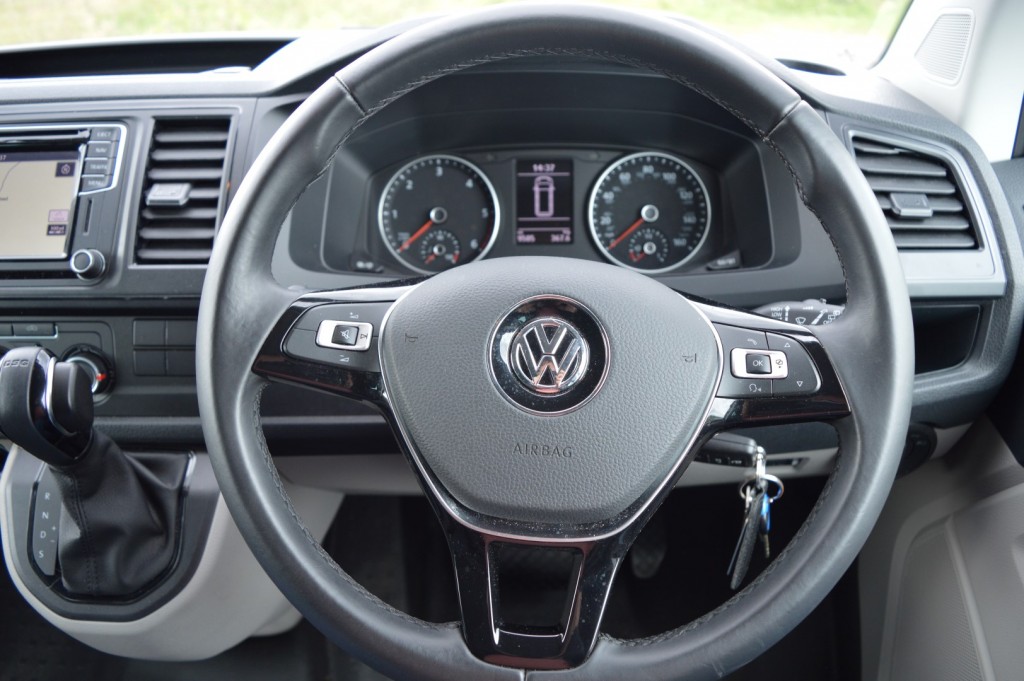 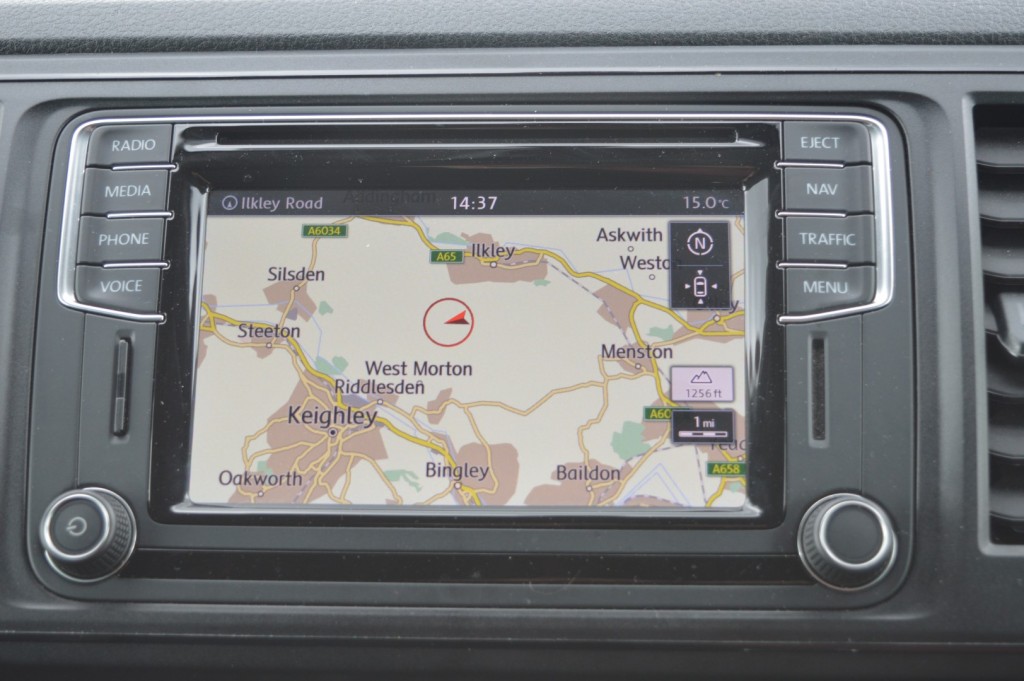 A bulkhead is not standard equipment in the Kombi van so rear seat passengers would be exposed to shifting loads in the rear. The triple seat, accessed via the left side loading door is detachable within a few seconds but would require two people to remove it from the vehicle due to the weight (note that there is not sufficient room behind the seat to allow access to the loadspace from the side door). This leaves the full loadspace area unimpeded and greatly increases the versatility of the van. In addition, the front passenger seat folds flat enabling occasional carriage of long items. The loadspace floor in the test van was covered in a very soft rubberised material and whilst the surface appeared quite tough it would not stand up to harsh treatment from heavy loads with sharp edges and many users will undoubtedly invest in a less attractive but much more practical plywood flooring surface. The van sides are covered a hardboard based trim but again, a full ply line would be a very wise investment. The floor is fitted with six load lashing rings.

The test van had a rear tailgate – great for some applications, not so for others. As with many vans with higher trim specifications the rear bumper is colour coded to the vehicle but vulnerable to damage as loads are moved in and out of the van. 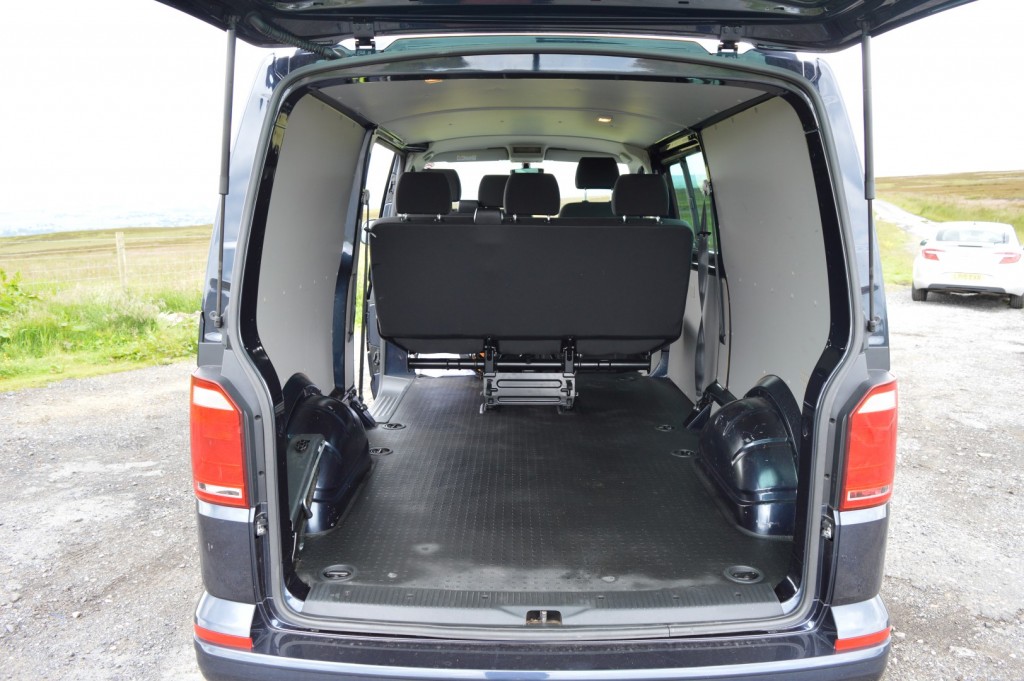 An unladen van fitted with a 180PS engine was never going to be a slouch and the Transporter didn’t disappoint. More than enough power was available throughout the rev range and for ‘tight’ overtaking manoeuvres this, combined with a DSG box which would kickdown in an instant made light work of such a task. On the subject of the gearbox, changes are smooth, seamless and sometimes almost undetectable. It has been a class leader for a while now with huge popularity in the passenger car applications and it really is an excellent unit, only matched  in performance by the new ‘Hi-Matic’ box fitted to the Iveco Daily (but with a Maserati heritage).

Although noise, vibration and harshness were not generally present in noticeable quantities, the 215/60 17 inch Goodyear tyres fitted to the test van were very noisy on some road surfaces. It could be argued that if the vehicle had been noisier in other aspects this would have been less noticeable.

The unladen ride was good with little of the ‘bounce’ which characterises some vans. The steering is precise and felt neither heavy nor overly light. From a personal perspective I never managed to adjust the seat so that my feet felt at a comfortable angle to the pedals. In particular the brake pedal felt very high in relation to the accelerator and unexpected braking was not achieved as seamlessly or smoothly as I would have expected. There were no knocks or rattles and the van had a definite feel of quality behind it. All in all a pleasure to drive and, with a very respectable average of 36mpg whilst in my possession, running costs should be very reasonable.

This is a very competitive sector. The Ford Transit Custom is a relative newcomer and an outstanding challenger to the Transporter. The facelifted Mercedes Vito is a much more capable vehicle than its predecessor and again would give the Transporter a run for its money. Having said that, Volkswagen have cultivated a loyal following in the fleet, retail and leisure sectors and attempts from rival manufacturers to achieve conquest sales will have to contain some very robust and credible propositions indeed. It is unlikely that there will be too many uncomfortable conversations in the boardrooms of Wolfsburg in the near future but the competition is hotting up, and quickly…