The market leader gets a makeover… 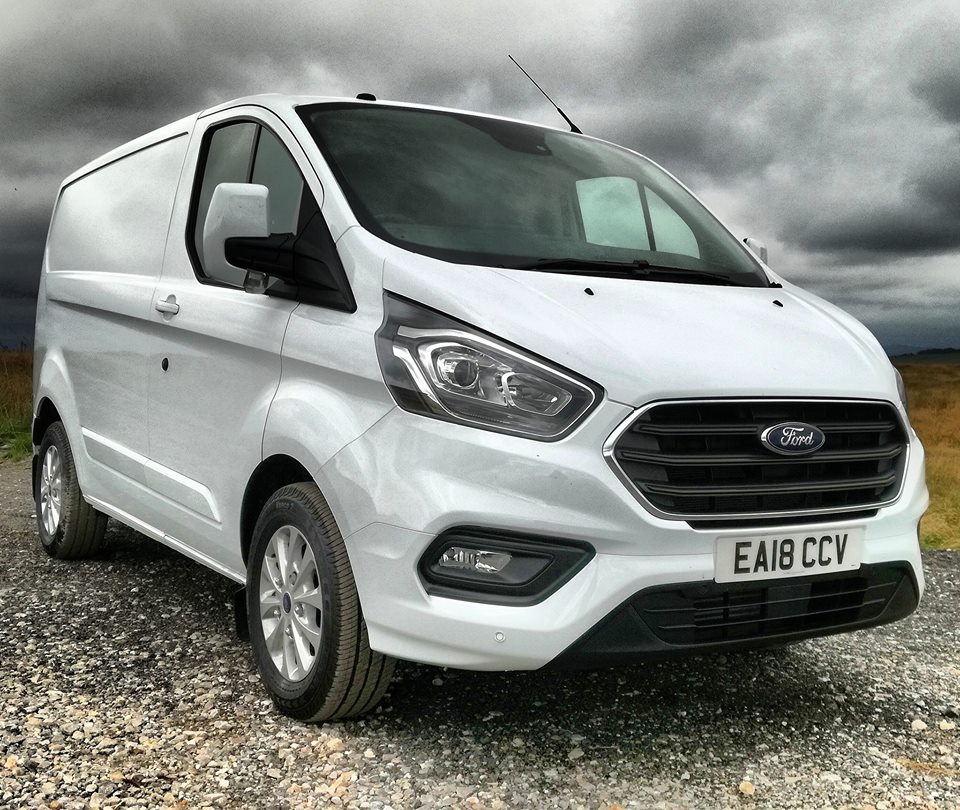 Since it was launched in 2012 the Transit Custom has been a firm favourite with drivers and fleet operators. Its reputation for comfort and practicality together with excellent residual values and running costs has made it regularly top the sales charts in the UK for all LCV’s, seeing the likes of the Volkswagen Transporter and Mercedes-Benz Vito desperately trying to keep up.

Apart from an upgrade to Euro 6 compliant engines a couple of years ago, the Custom has remained fundamentally unchanged in six years, something almost unheard of in the passenger car world, and a relatively lengthy lifecycle for a LCV. Spring 2018 however saw Ford announce a ‘MCA’ (Mid-Cycle Action in internal speak) for the Custom, a facelift of the original van rather than an all new vehicle. Clearly identifiable from the exterior by the new, imposing corporate grill carried over from the car range, the van also benefits from a new cab interior. Engines remain unchanged, as do, practically speaking the loadspace features and internal / external dimensions. 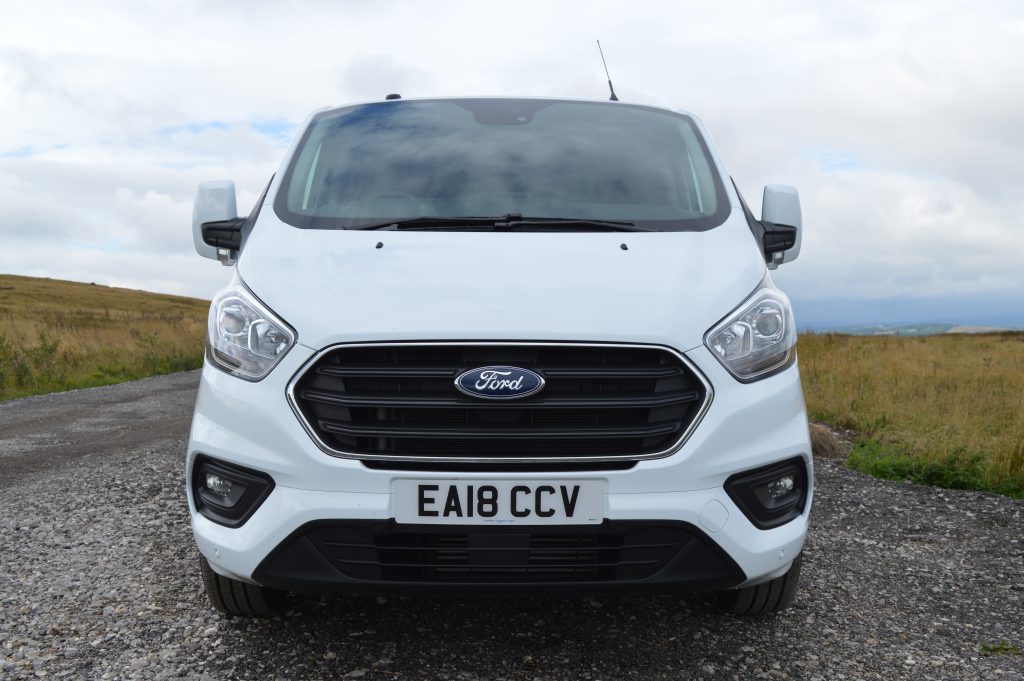 The Custom is available in two lengths, two heights, seven GVM’s (offering payloads from 685kg to 1459kg), a choice of three engines (105PS, 130PS and 170PS), four trim levels (Base, Trend, Limited and Sport) and the availability of Double Cab in Van, 9 seat Kombi and the 8 seat Tourneo models for those needing the flexibility to carry additional passengers. There is also the option of the ‘SelectShift’ 6 speed automatic transmission.

The test van was a 280 130PS L1H1 (short wheelbase, low roof) model with manual transmission in Limited trim. Effectively seen as the ‘range topper’ by many, at this trim level the van is very well equipped with Ford’s ‘SYNC 3’ 8 inch touch screen and voice controlled media centre (although navigation is an option, surprisingly at this level of trim), heated seats, air conditioning (not climate controlled), cruise control, heated windscreen, and front and rear parking sensors. From the exterior, the Limited can be identified by 16 inch alloy wheels, body coloured side mouldings, door handles, mirror housings and bumpers together with a chrome grille surround. For security, a Thatcham Category 1 alarm is fitted. 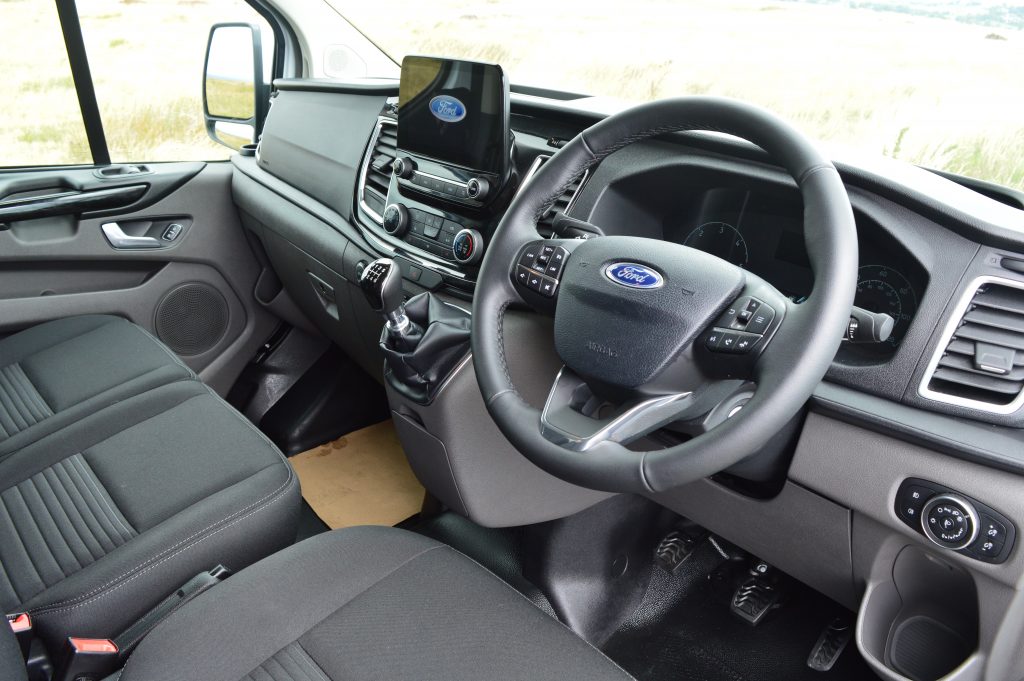 The cab is accessed very easily and one is met by a clean, uncluttered environment and a functional and well designed dash dominated by the SYNC 3 screen. Materials are clearly of a high quality and there is immediately an air of refinement that one would be forgiven for not expecting in what is a volume selling commercial vehicle. Visibility is excellent, in particular the lower edge of the windscreen is not obscured, unlike in some other vans. Storage for all the paraphernalia usually carried by the van driver is well catered for with extensive capacity in the doors and plenty of room for smaller objects, paperwork etc in recesses on top of the dash. This area also benefits from USB and 12 volt sockets in addition to ones elsewhere in the cab. There are a number of cup holders, and, a drop down writing surface is provided on the centre passenger seat. 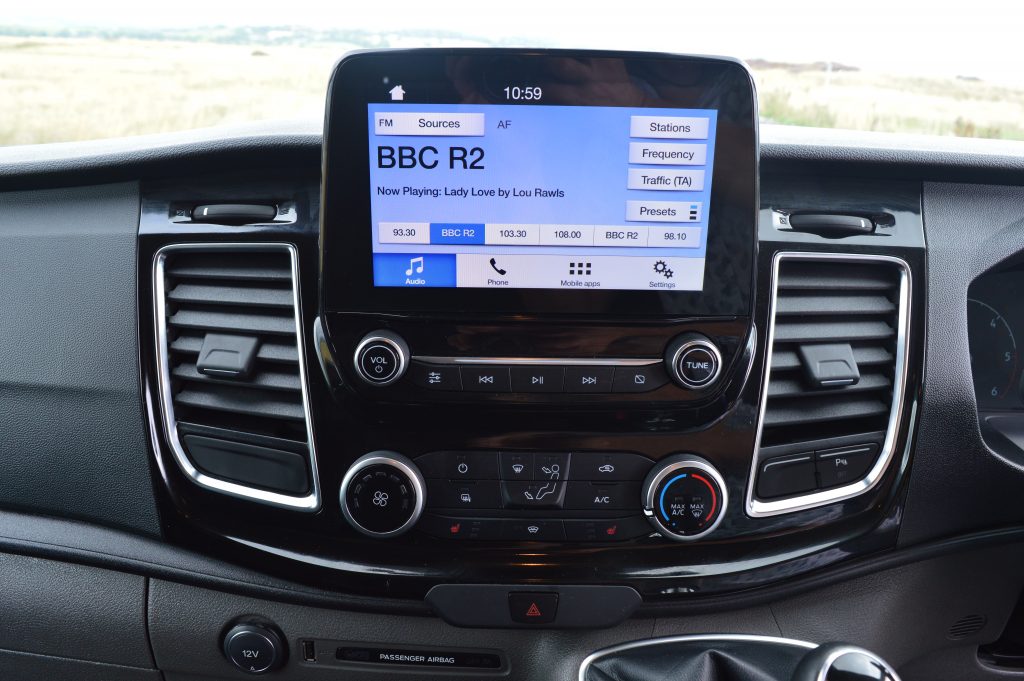 You’d expect Ford to know a thing or two about designing load areas in a van, and this is very evident in the Custom. A low loading height, nice straight sides, minimal wheelarch intrusion, four pairs of load lashing eyes, an almost flat bulkhead with a load through aperture (so many have large lumps, bumps and projections which can make neat loading of boxes, for example awkward and inefficient) and a plastic floor coating (standard on the Trend and Limited spec). The only area overlooked is internal lighting which is catered for by two standard, largely ineffective bulbs. Given that LED lighting is now relatively cheap, there really can be no excuse for not having this as standard, particularly at this trim point. It makes all the difference to a driver working in low light conditions. 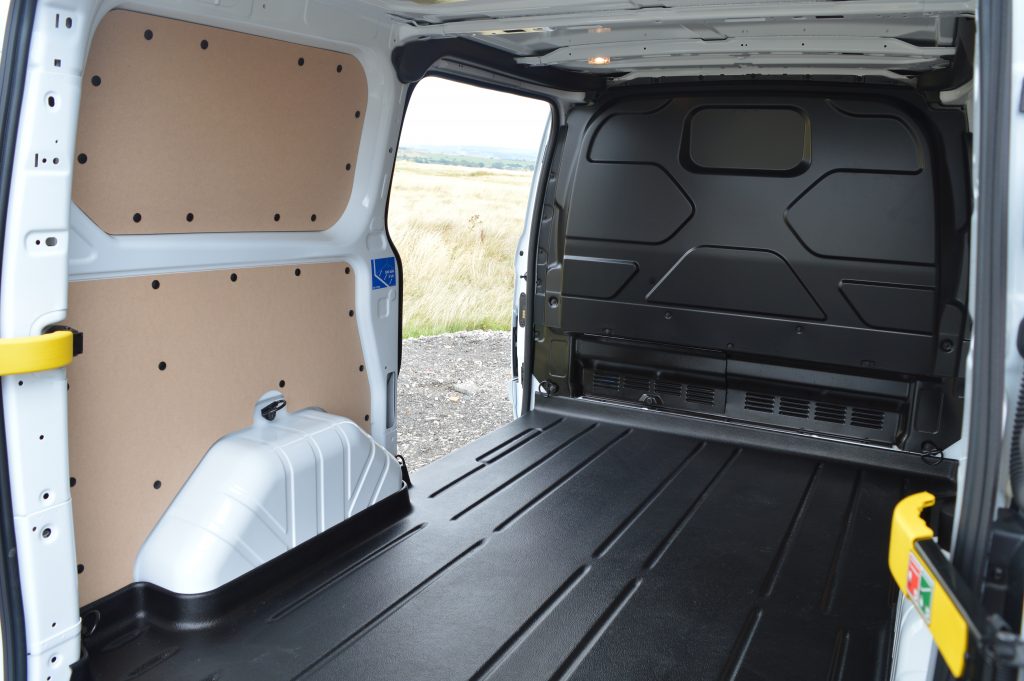 The first impression when driving away is one of smoothness and refinement. The 2.0 litre ‘EcoBlue’ engine is remarkably quiet, and this lack of noise isn’t restricted to low speeds – a conversation with a passenger in very hushed tones is perfectly possible even at motorway cruising speeds. Noise from all sources (road, tyres, wind) is minimal and on a par with many passenger cars. In addition, the cab is insulated from harshness and vibration to a level I have never experienced before in a van – it is groundbreaking. Passengers who rarely travel in a van were impressed and without prompting commented on how the experience led them to feel that they were actually travelling in a quality car. From a performance perspective, the 130PS unit develops a mighty 385nm of torque and this is very evident at low engine revs under load. Otherwise, acceleration was brisk and adequate, but there are certainly quicker vans out there. Although the driving position is generally good, I found the brake pedal to be in a position that made it difficult to reach without my foot being at an uncomfortable angle. Experimenting with seat adjustment didn’t seem to help and, if it’s not something suffered by others I can only put this down to my rather small feet…

Over 500 miles, the trip computer recorded an average of 40mpg with a good mix of (albeit unladen) driving environments. 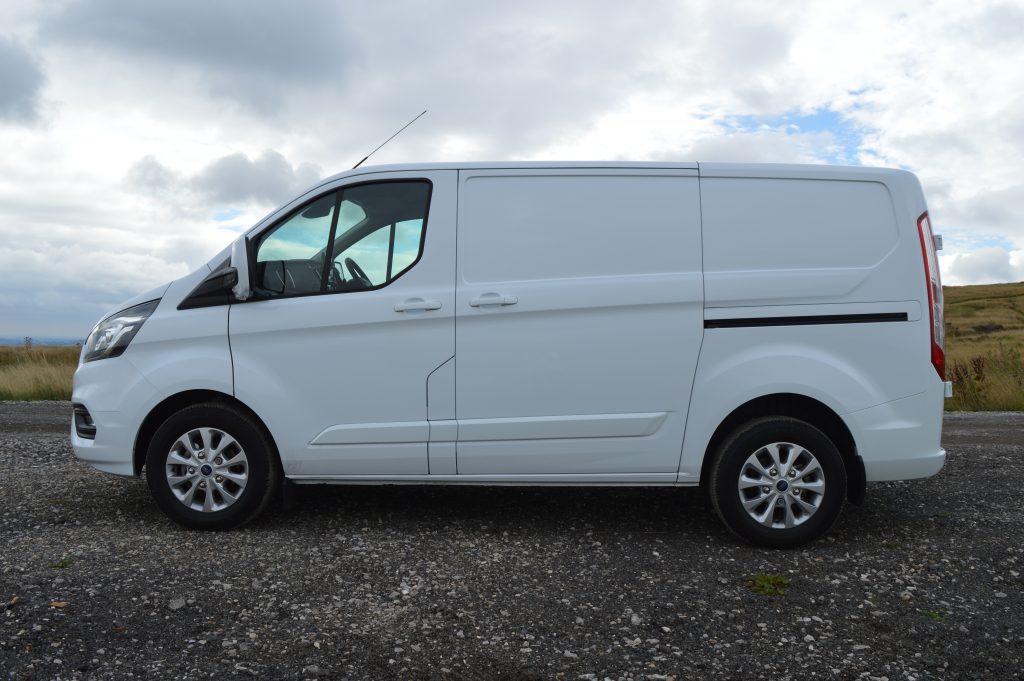 The Custom has benefited from the growth in the market for lifestyle sector and has become the basis for some extremely attractive aftermarket offerings, such as leisure and the MS-RT sport style conversions. This was previously a market dominated by the Volkswagen Transporter but Ford are now making some very serious inroads into previously unexplored territory.

I first drove the original Transit Custom in pre-production form on a private track in Europe in 2011. It was immediately apparent that Ford had come up with a game changer and a sure fire winner. There is always the probability that, given time the competition would raise their game and match the market leader, but, having driven all the competition in their most recent incarnations, the Custom remains the one to beat. It simply ‘just feels right’, a phrase hard to qualify but most appropriate for this truly outstanding van. 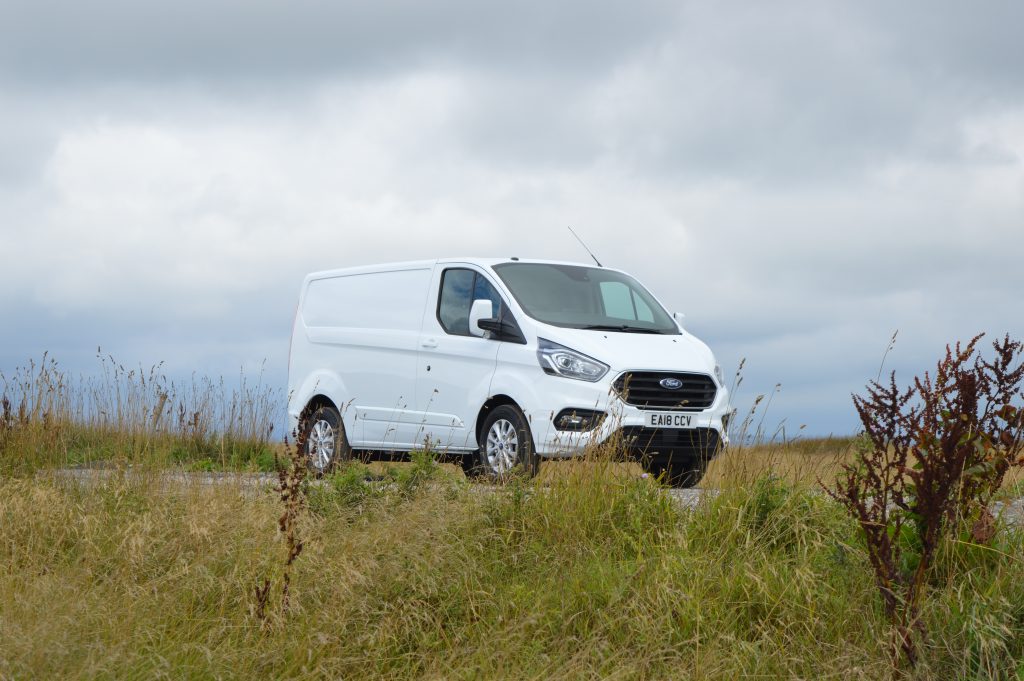