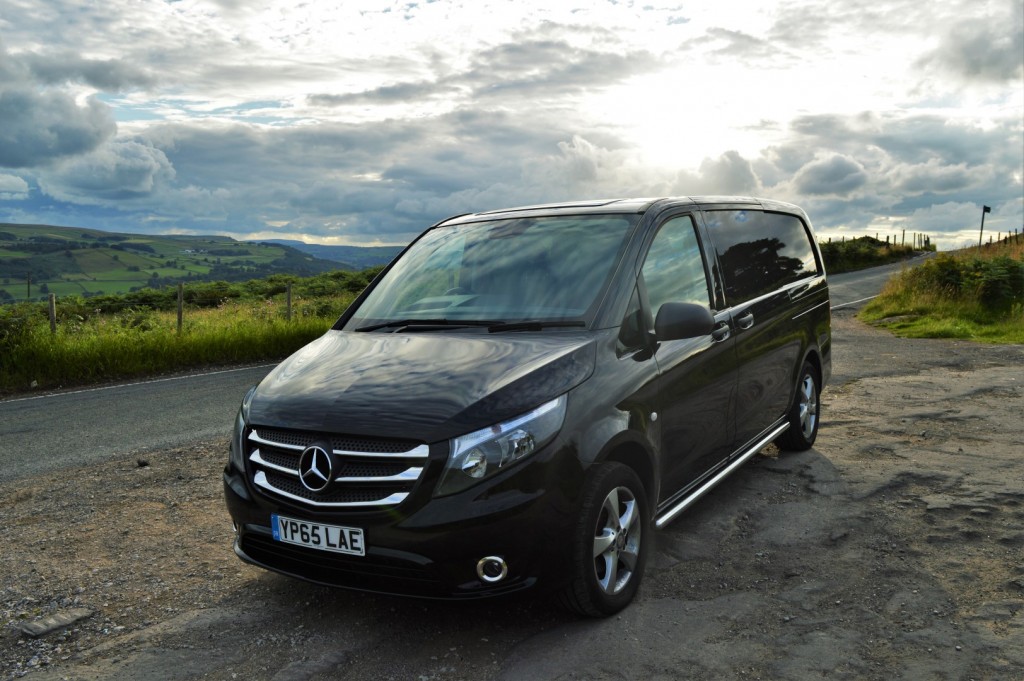 The Mercedes-Benz Vito – a van that has traditionally struggled to find its feet within the fleet market but that has proved immensely popular in the SME sector, and the passenger carrying variants have an incredibly loyal following. Mercedes-Benz have relentlessly pursued Volkswagen in their quest for domination of the ‘premium’ medium van sector but question marks over build quality and early corrosion issues have hampered their efforts somewhat in a market with long memories. Having said that, the influence of the three pointed star to subsequent owners has fuelled a very healthy market for used vehicles, particularly for high specification and dual purpose vans. 2014 saw the introduction of the latest generation. External differences are relatively subtle but a new interior and the fact that it is built onto a new floorplan and platform essentially make the van ‘all new’. 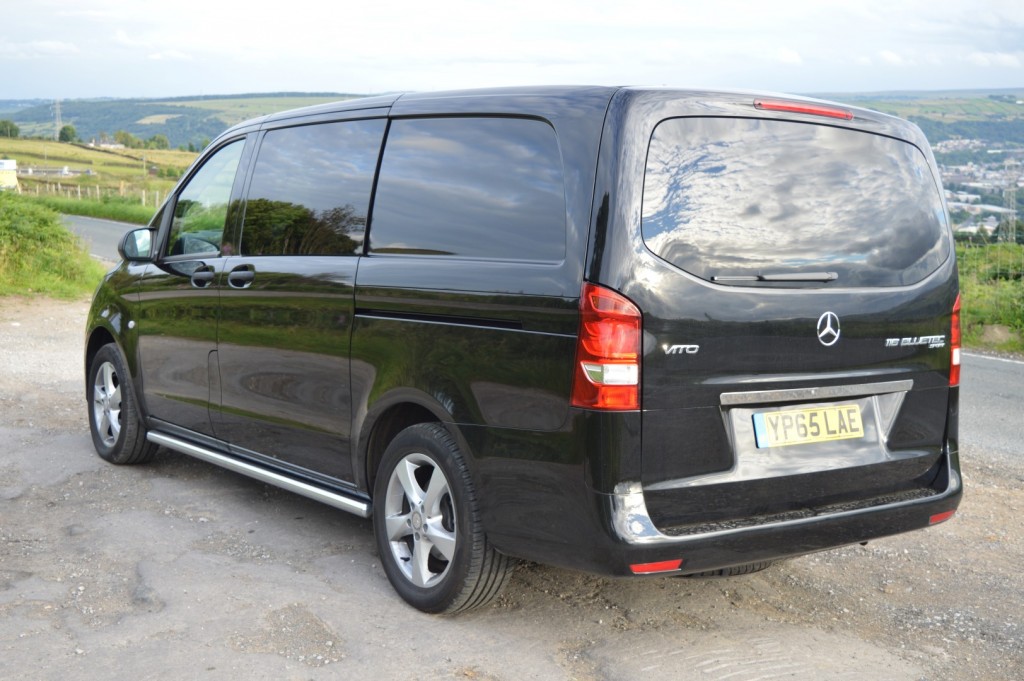 The Vito is available in front or rear wheel drive guises. 88PS or 114PS 1.6 litre engines sourced from Renault (although ancillaries including the ECU, cooling, turbocharger etc. are all added by Mercedes) power the FWD vans whilst Mercedes own 2.1 litre Euro 6 twin turbo units drive the 136PS, 163PS and 190PS RWD versions (the latter engine only available with the 7 G-tronic auto transmission). Two wheelbases give three load length options and whilst only one trim level is offered (excluding the ‘Sport’ derivatives) a lengthy option list allows customers to tailor vans specifically to their requirements. A crew van option is available giving additional seating to the rear whilst retaining a useful loadspace area. The ‘Tourer’ models are the passenger carrying vehicles in the range.

Standard equipment throughout the range includes the ‘Audio15’ media unit with Bluetooth, twin side loading doors (unique in the sector), cruise control and enhanced safety features such as ‘Attention Assist’ designed to help avoid driver fatigue, ‘Crosswind Assist’ and ‘Adaptive ESP’. A three year warranty is included, as is the excellent ‘Mobilo’ roadside assistance for up to 30 years.

The van provided for test was a 116 BlueTEC Sport LWB Crewvan. This has the 163PS Euro 6 engine and the extra touches that come with the ‘Sport’ specification, including 17 inch alloy wheels, colour coded bumpers, chrome trims and sidebars and ‘Sport’ floormats.

Externally the van, particularly in its ‘Sport’ guise looks great. The dominant three pointed star on the front grill is clearly designed to make a firm statement and it does this with Germanic efficiency. The alloy wheels, the chrome trim surrounding the front fog lights and the chrome side bars give a really stylish appearance, but, even without this ‘bling’ the standard van is something that any owner or operator would be more than happy to have on his driveway.

The Sport crewvan comes with ’Comfort’ driver and single passenger seats. Comfort really is an apt description, the seats being very car like and easy to adjust giving all the support required for a long journey whilst still facilitating an easy entry and exit. In addition the front seats come with foldable armrests which, for the driver work really well and lead the left arm and hand naturally to the gear lever. 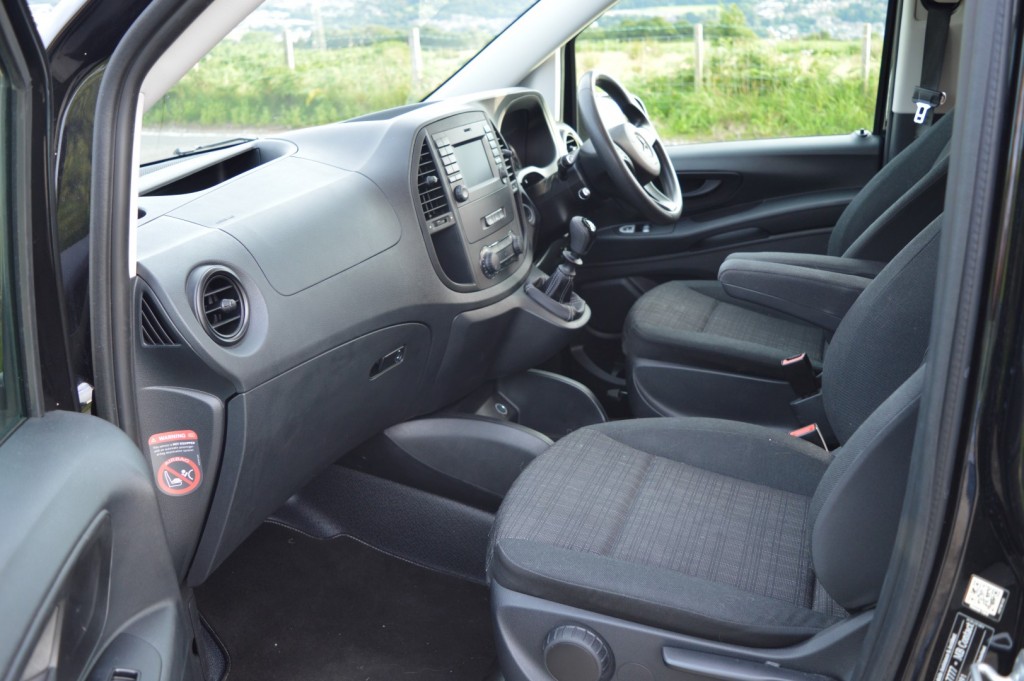 The dash is a little imposing with a flat, almost ‘cliff face’ appearance and not to my personal liking. Having said that, from a functionality perspective it works, having all controls including the media unit within easy reach. The instrument panel is simple but clear and effective and contains the trip computer display. The optional satnav fitted to the test van was easy to read due to the proximity to the driver’s line of sight, despite being in a central position although the lack of ‘touch’ facility to this and the media screen that it shares made operation less easy than some. Mercedes cite that this feature is not available for safety reasons. Notable is the lack of DAB  radio, a big omission these days  but on the plus side the sound quality provided by the audio system is outstanding. A multifunction steering wheel offers fingertip access to the usual audio / computer and telephone operations. 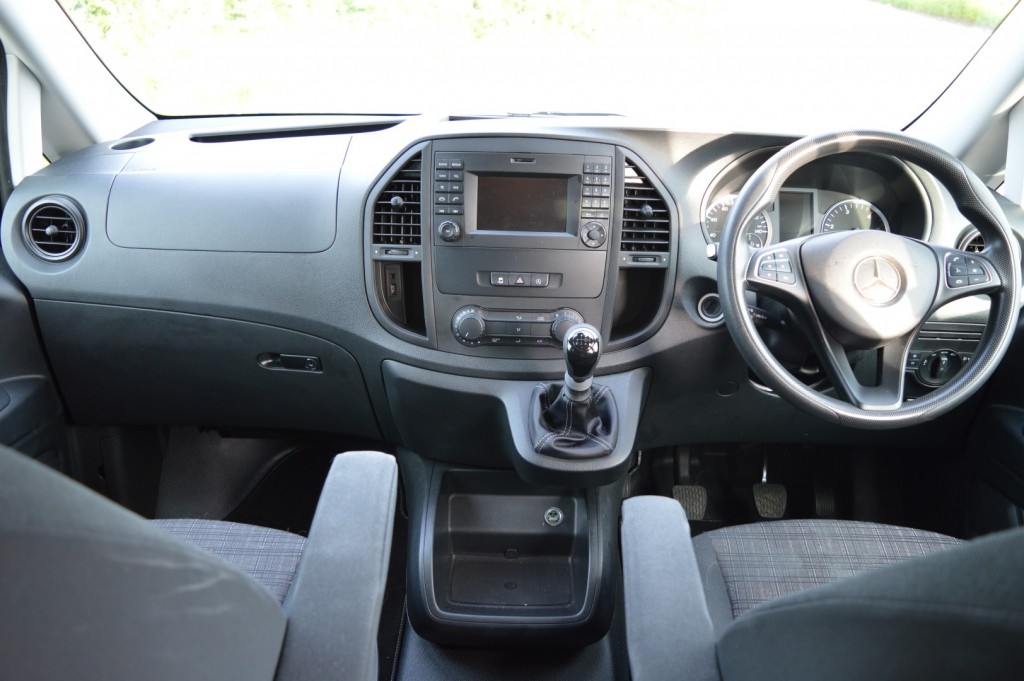 Cab storage is less than generous, limited to three flat ‘trays’ on the top of the dash together with two drink holders, two large bins in each front door, a low level central tray with a 12v accessory socket and two small apertures below the media unit, one containing USB and media inputs.

Air conditioning (standard equipment on the Sport) combines with an excellent ventilation system which was also ducted at floor level to the rear seated passengers.

The twin side load doors with tinted (but not opening) windows give access to the ‘crew’ section and the seat which gives excellent space for three additional passengers. 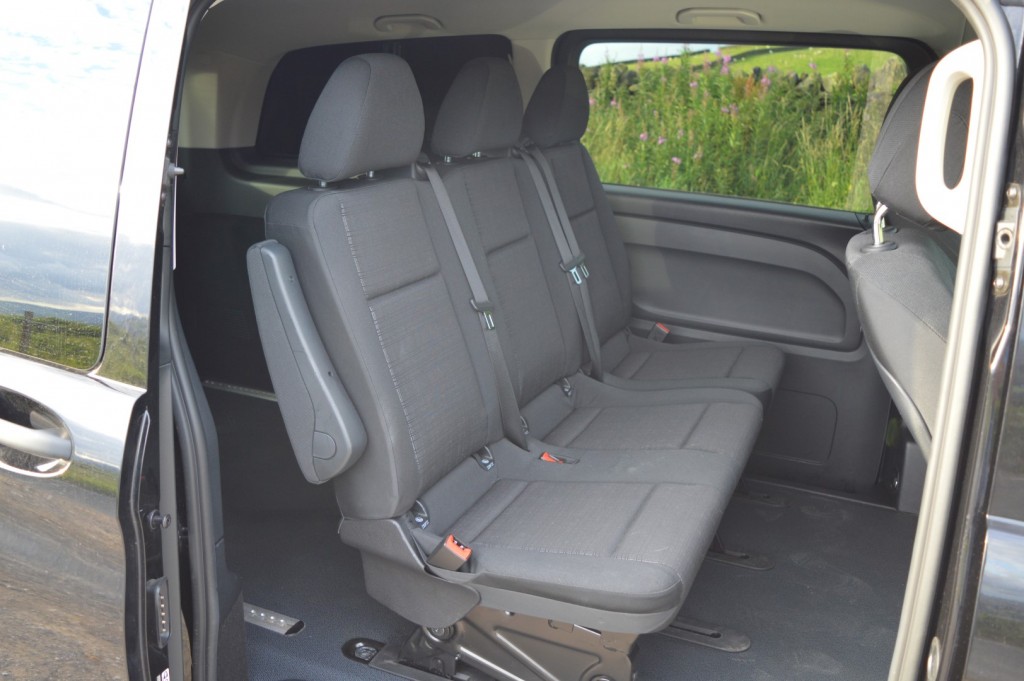 The ‘Sport’ crewvan has a high level of trim in the rear and so doesn’t really cater very well for regular load carrying. The loadspace trim is more akin to a car boot with soft trim, additional speakers for the audio unit and a full length headlining. Ply lining could only be achieved by stripping out much of this material and users who intend using the van for regular (particularly heavy and / or dirty) load carrying duties would be wise to avoid the Sport trim. Otherwise, access via the rear tailgate is good and despite being rear wheel drive the loading height is very low. The triple seat is removable to allow full loadspace utilisation when required. The floor covering is vinyl and the test van had sections of tracking recessed into the floor. 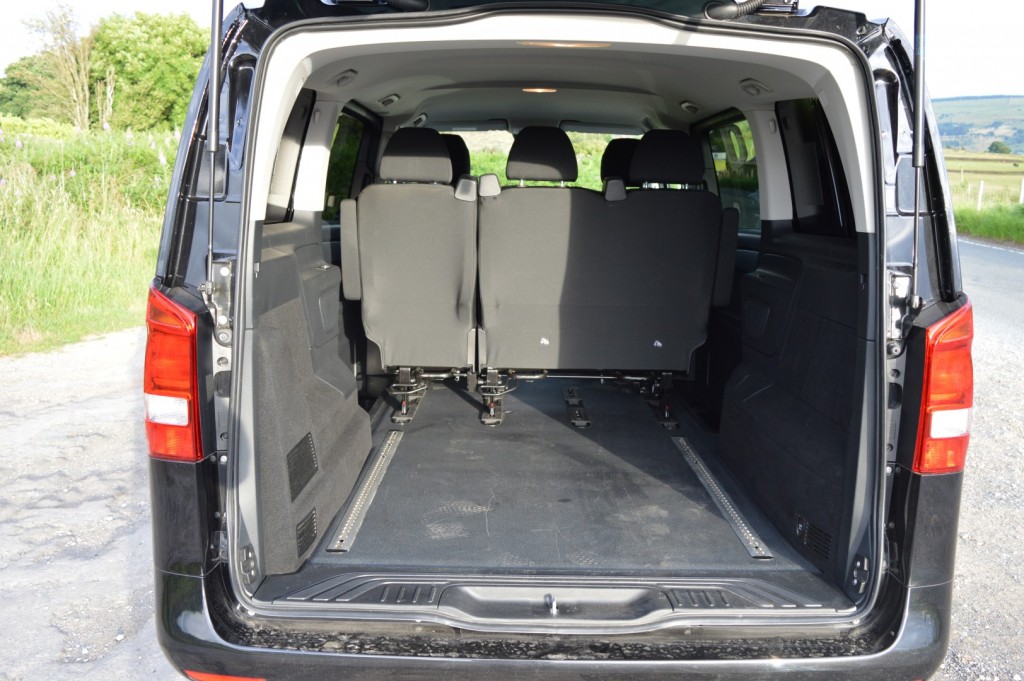 As previously mentioned the driver’s seat is very comfortable and the pedal layout works perfectly. Visibility is more than adequate although the rear view mirror is perhaps superfluous in this specification as the centre rear headrest obscures any potential view through the rear window. The engine starts  right on the button and, although not the quietest the noise level is quite acceptable, albeit with a touch of harshness when pushed hard. At this output acceleration through the gears is impressive and the van coped with any gradients Yorkshire could through at it without hesitation. The gearchange was a little notchy, best described as the lever feeling more remotely connected to the gearbox than with some competitors. Changing down to the lower ratios in traffic was sometimes met with baulking, not something expected in a modern vehicle. The Vito’s suspension, whilst coping very well with larger bumps and undulations was less tolerant of smaller imperfections in the road surface and these could be felt in the cab area. Rear wheel drive now feels a little strange in this sector and axle hop was noticeable sometimes when turning tight corners under engine load.

Although the test van was only a few months old there were a few odd squeaks and rattles here and there which gave an impression that the build quality wasn’t perhaps at the standard that the badge would suggest. The general level of noise and vibration in the cab was however very low, with road noise almost non existent.

Where the van came into its own was on a motorway drive. Setting the cruise control to 70mph in 6th gear gave an engine speed of just under 2000rpm and an extremely relaxed driving experience. There is a refined air about the cruise and you were left with the impression that the van would just eat up the miles on a long run in the most comfortable way possible with minimal driver or passenger fatigue. 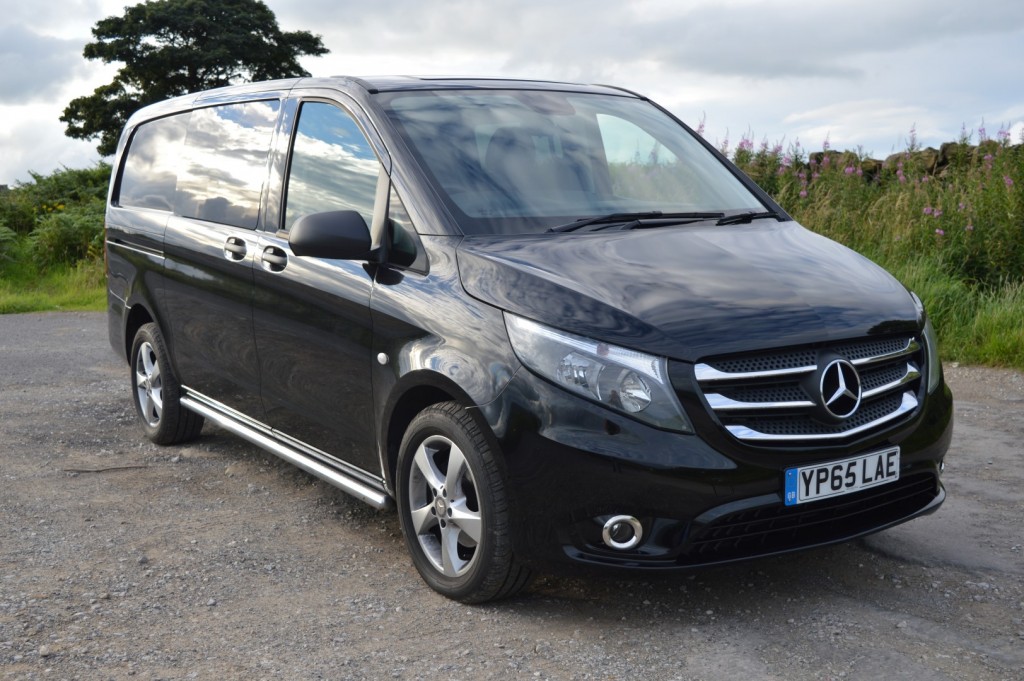 The Vito in its latest guise is a great looking van. The artisan tradesman needing a van to portray a positive image for his business need look no further, the van in Sport trim is possibly unbeatable in this regard. From a running cost perspective the van achieved a very respectable average of 43mpg during its week with me and, with strong residual values and a good demand in the used market (particularly in a metallic colour and with some options) whole life costs should be amongst, if not the best. Dealer back up is first class and with the reassurance given by the ‘Mobilo’ roadside assistance a prospective purchaser really should have very little to worry about. It has to be said though that the Vito has two very strong competitors and, unfortunately from a driving perspective they both outclass it. Although the design is good the suspension, gearchange and overall ‘feel’ on the road isn’t quite class leading. It has to be stressed though that for motorway driving the Vito really does excel.